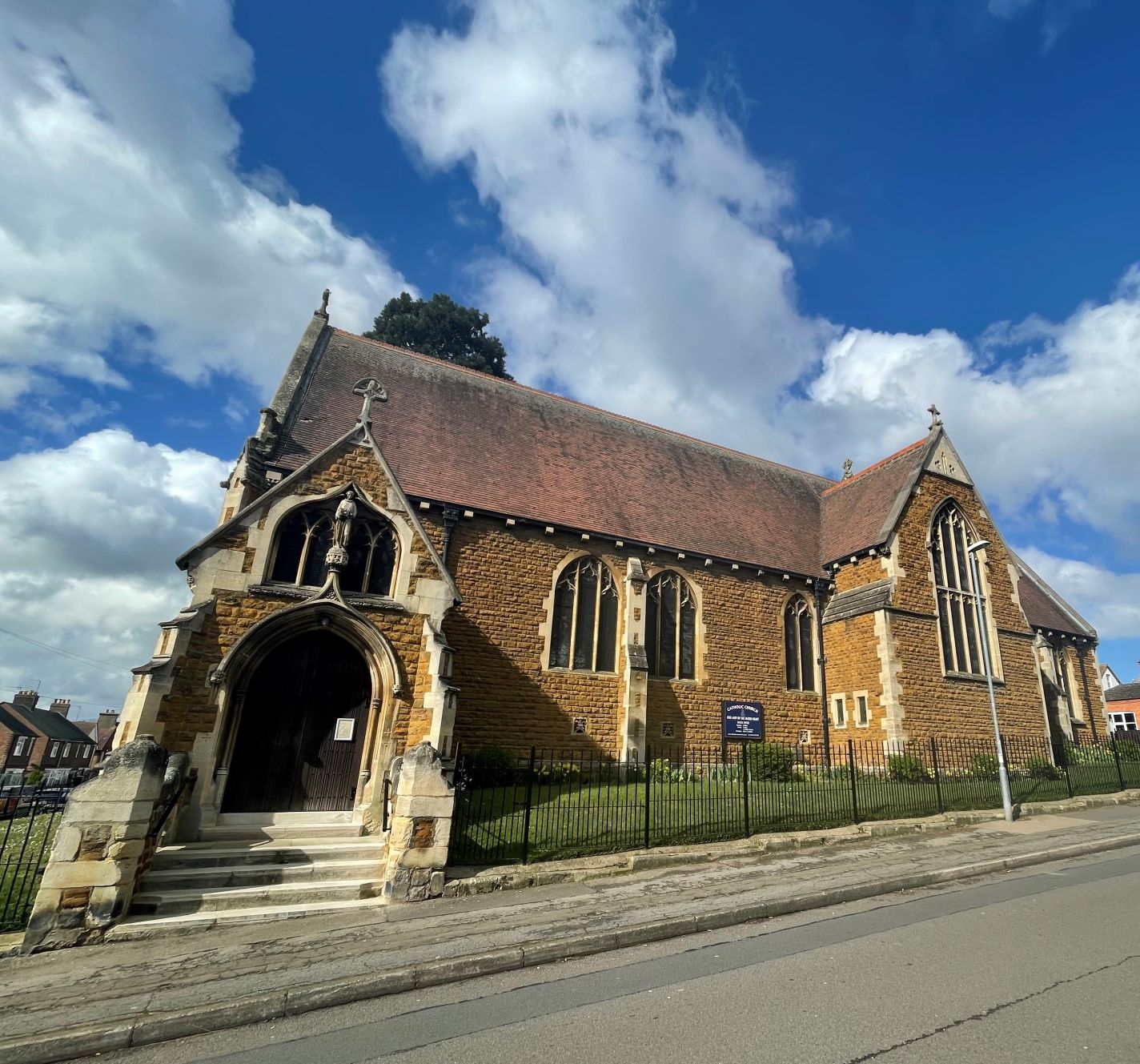 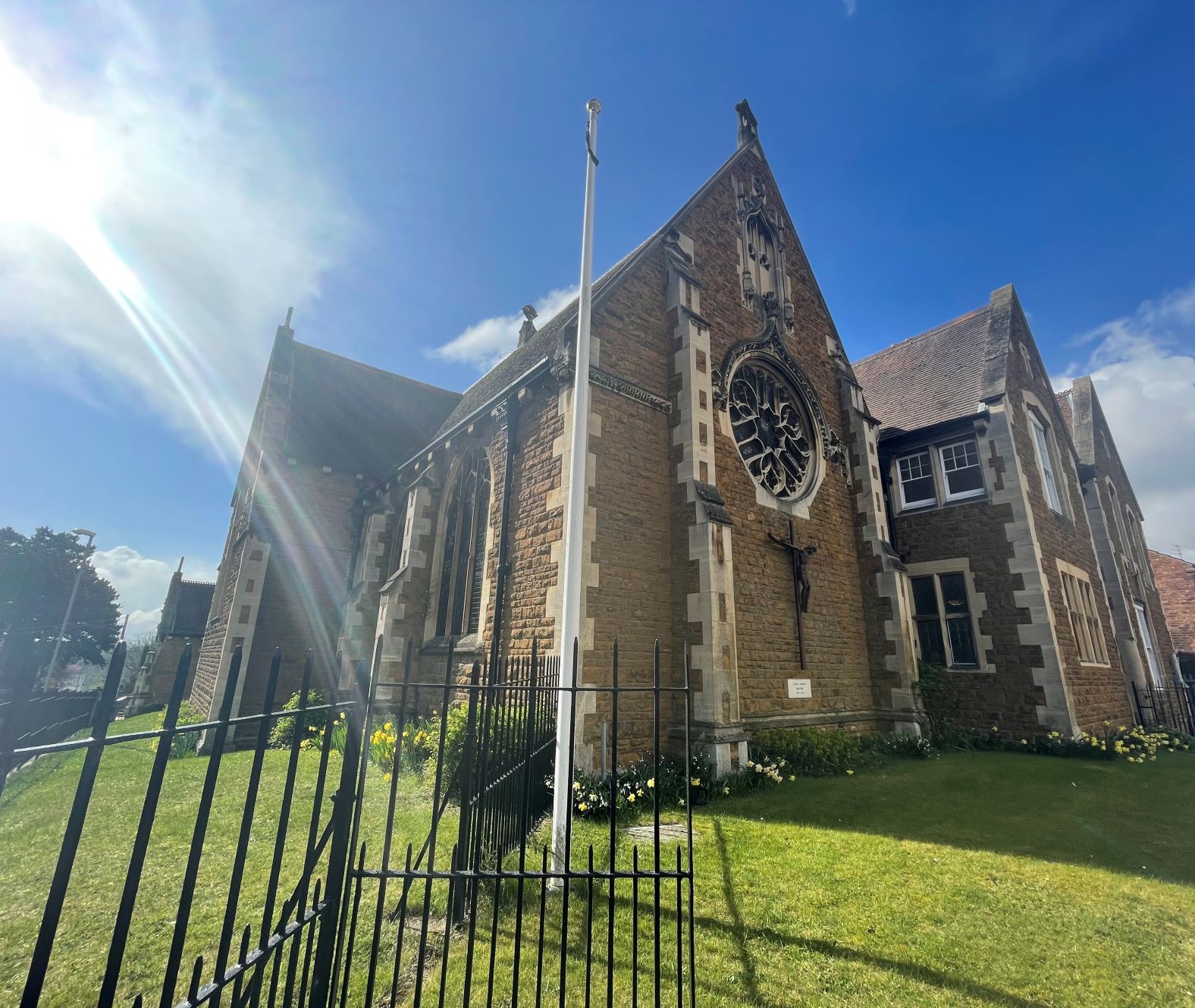 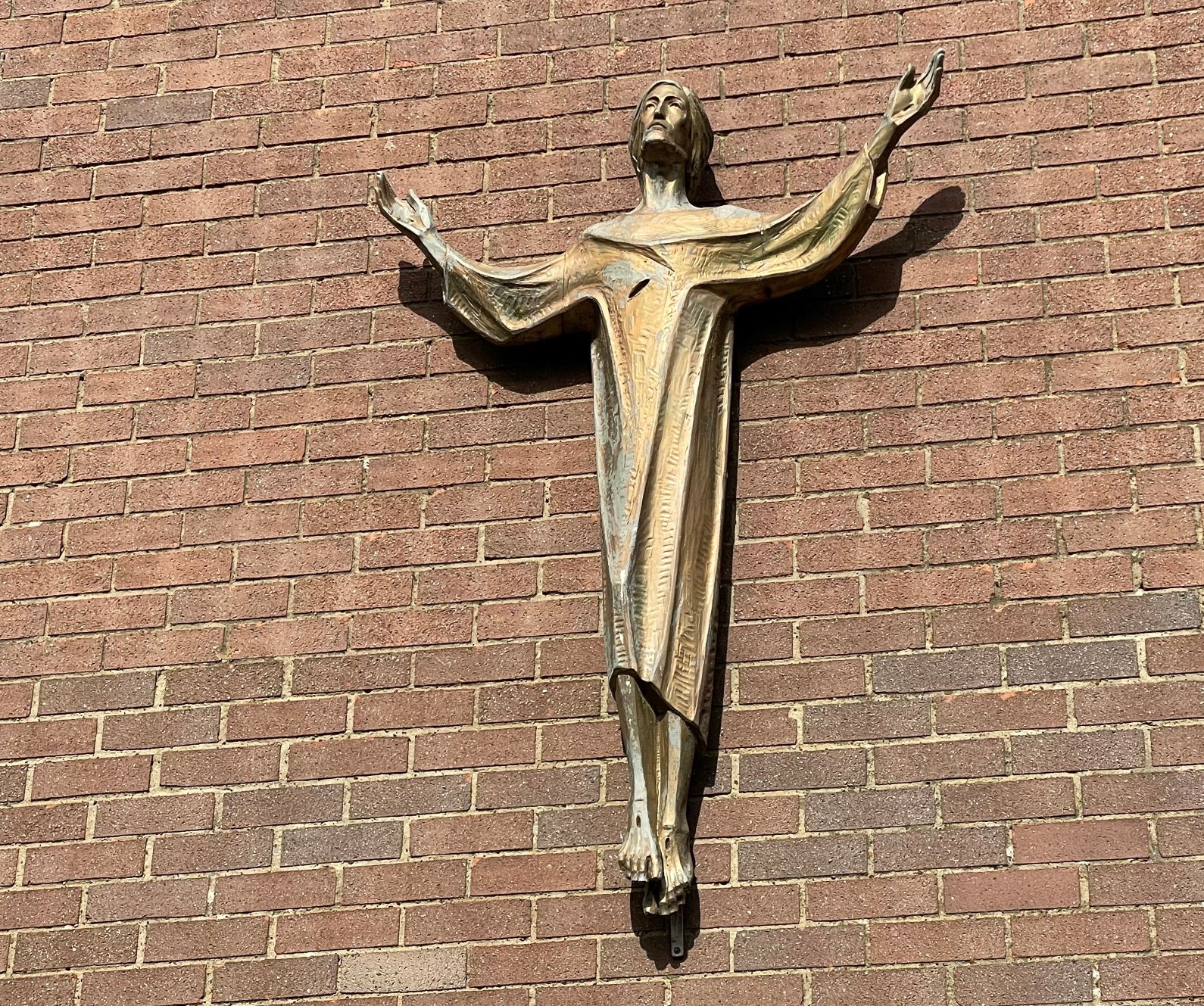 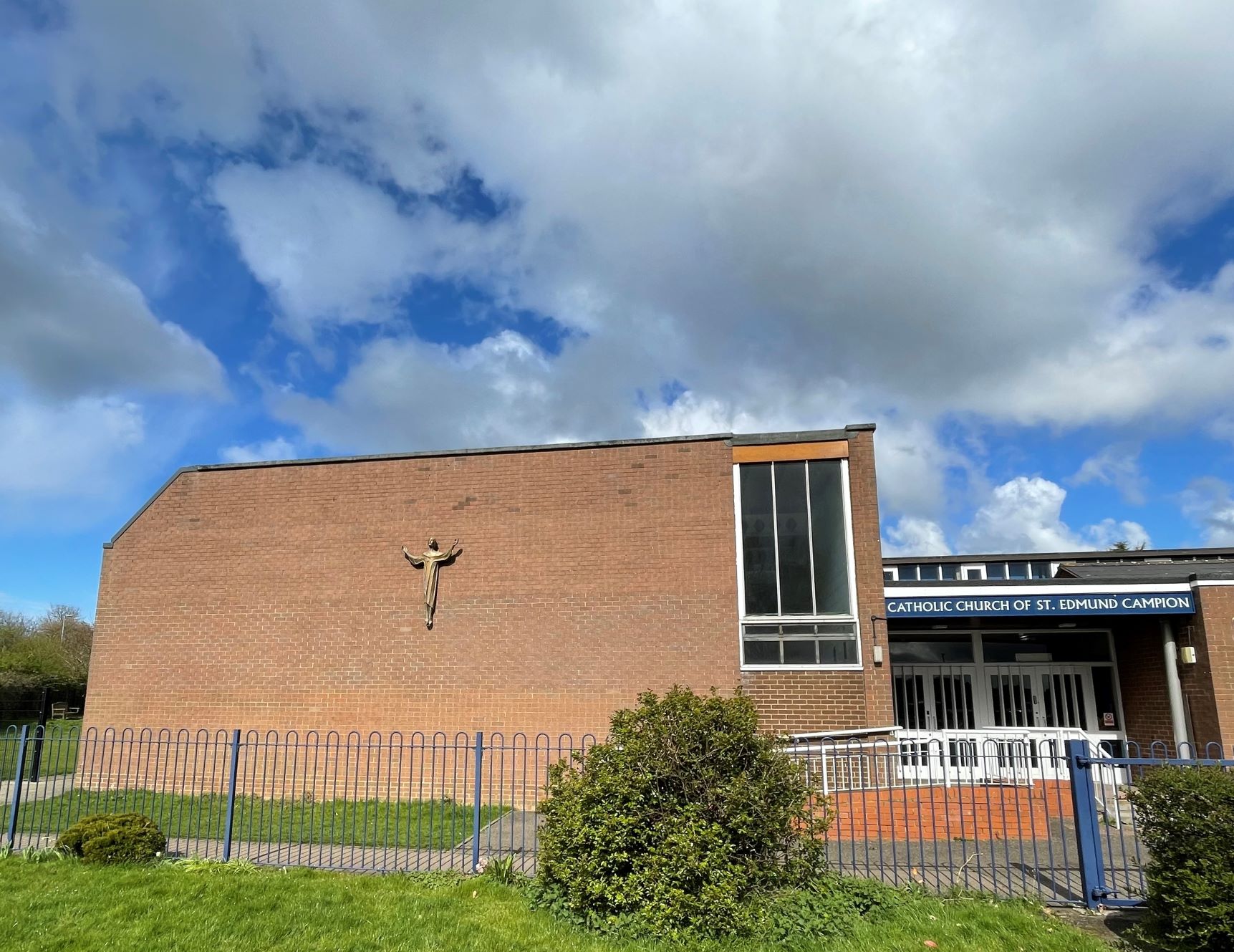 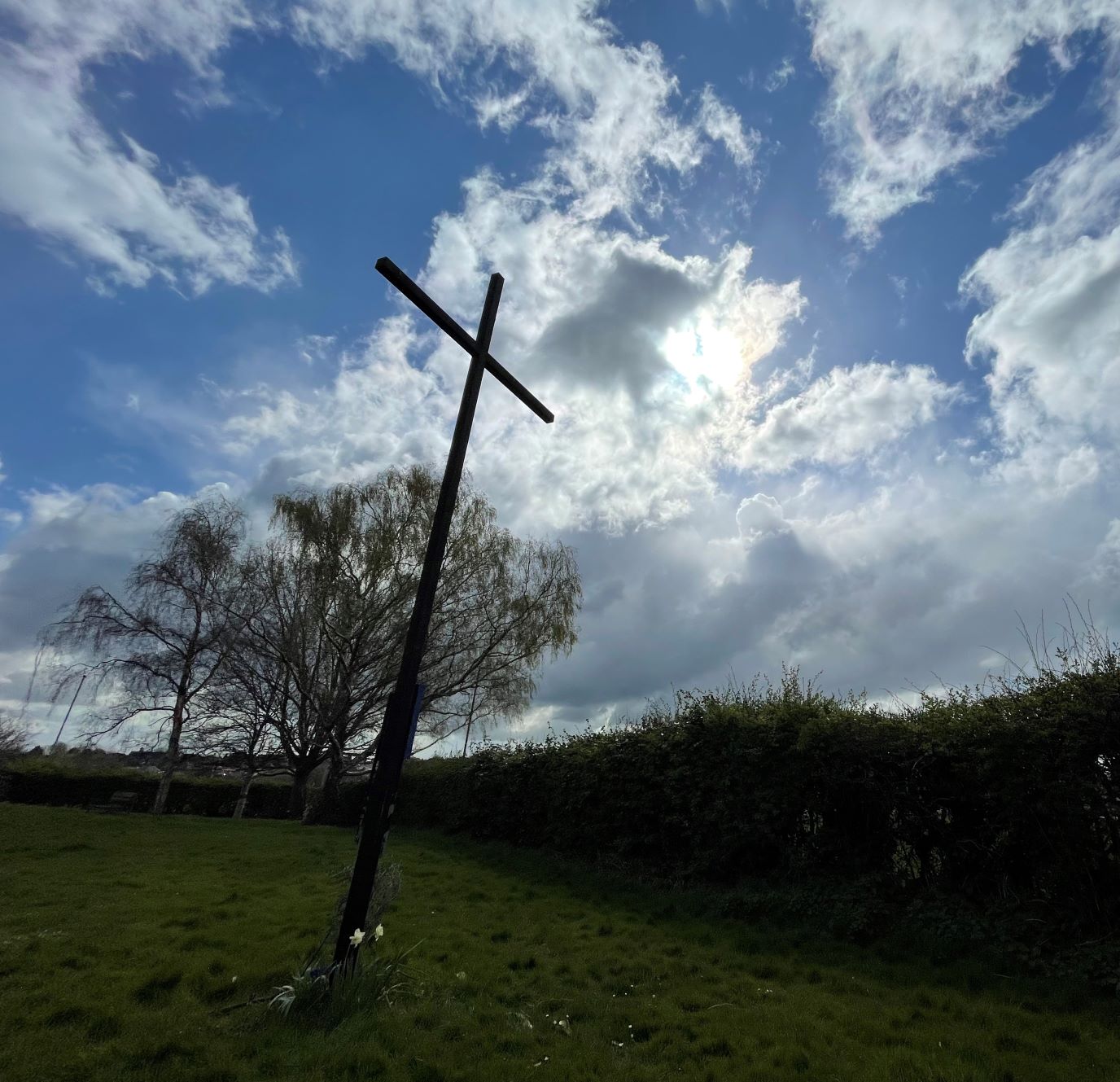 A 1970s church building displaying the post-Vatican II trend towards multi-purpose use. The sanctuary is attractively top-lit.

In the late 1960s Wellingborough was identified for expansion. The 1968 Wellingborough Urban Structure Plan proposed more than a doubling of the town’s population by 1976. There was much debate as to whether a new Catholic church and school could be built, and it was eventually possible to build a combined church and school, with the school hall separated from the church by a screen which could be folded back in order to double the seating capacity of the church from 250 to 500. This was partly made possible by an unexpected bequest from John Henry Willman, who grew up at Great Harrowden (two miles northwest of Wellingborough), later became a Catholic, and left money for a church at Wellingborough to be dedicated to Edmund Campion (who had been canonised in 1970). The architects were Desmond Williams and K. H. Milton of the Ellis Williams Partnership, Liverpool.

The church and church hall form an irregular L-plan. It has a steel frame with a concealed flat roof supported by pierced rolled steel joists. Externally the building is faced in brick but internally the frame is exposed with blockwork between, all painted white. The principal day lighting to both church and hall is from bands of clerestory glazing, set at an angle on the outer side of the L but vertical to the south. The entrance to the church is marked by a tall glazed slot, continued with a recessed panel of brickwork below, otherwise windows are at low level and light ancillary spaces. The sanctuary is set against the corner of the L, which is chamfered and steps up higher than other areas, emphasising its importance. Ancillary spaces are grouped in single storey structures around the two outer sides of the L around the sanctuary. Mounted on the largely plain south wall is a statue of the Risen Christ. The combined entrance to both school hall and church is provided at the junction of the two on the south side. A permanent disabled access ramp was provided as part of renovation works carried out in 2004.

On entering the porch or narthex a glazed screen straight ahead leads into the hall whilst a similar screen to the left gives access to the church. The church is a single lofty space with the sanctuary raised up on a polygonal platform against the chamfered northwest wall, but with the altar oriented directly facing the seating to the south. The seating was renewed in 2004 with interlocking chairs. The sanctuary comprises wooden altar and ambo (probably dating from 2004) with the tabernacle on a stand against the wall together with seating for clergy and lay servers etc. Fixed to the wall are three individual rood figures. To the right of the sanctuary are the Lady Altar and the large folding screen wall to the school hall/church extension. This comprises two screens with an acoustic gap between the two. On the other side of the sanctuary are the confessionals and access to the sacristies and other ancillary accommodation.

OUR LADY OF THE SACRED HEART

One of several churches in the diocese by the London architect S. J. Nicholl. The church is distinguished by some highly original details, and has a largely intact and lavishly finished interior.

The establishment of a mission in Wellingborough in 1869 was largely due to the Arkwright family (Catholic converts) of Knuston Hall, two miles east of the town. Until a church could be built Mass was said in rented venues. Land for the permanent church was purchased incrementally between 1873 and 1882 and S. J. Nicholl was commissioned to design the church in 1884. The church was opened on 2 September 1886 and cost £5,281. The presbytery was built in 1893-4 at a cost of £1,558. An intended tower was never built.

See also list description, below. The altar faces north but for the purposes of this description all references to compass points will be on the basis of an eastward facing altar. The list description is broadly accurate and comprehensive. Externally the church is in late Gothic style, with characterful idiosyncrasies such as the unconventional tracery of the rose window embellished with an enriched ogee hoodmould and the traceried niche above. Also the hood mould of the south porch rising to a finial topped by a winged angel that forms a central mullion to a four-light ogee-headed window.

The interior of the sanctuary and north transept is more idiosyncratic, with a feeling of the wilful ‘high Victorian Rogue’ design in the treatment of the wall and arches between the sanctuary and the organ chamber. The sanctuary has an unusual arrangement of a baldacchino integral with the east window. It is richly decorated and has an ogee rib vault. Half arches link to the sanctuary arcades and the whole has more of a Georgian Gothick character. Richly decorated high altar and side altar. Rood and rood beam with painted decoration to the roof above. Octagonal stone pulpit and font, both carved and ornamented. Other carved altars, sculptures and decorative  enrichments. Attractively painted organ case in the north transept, restored in 2001. Nineteenth century pews. Stations of the Cross purchased from Burns & Oates in 1887. Alabaster altar rail around a framed icon at the west end of the nave. Several stained glass windows in the sanctuary and north transept, some attributed in the list description to C. E. Kempe, but more likely by the Catholic firm of Lavers, Barraud and Westlake.

Retired Priests resident in the Parish 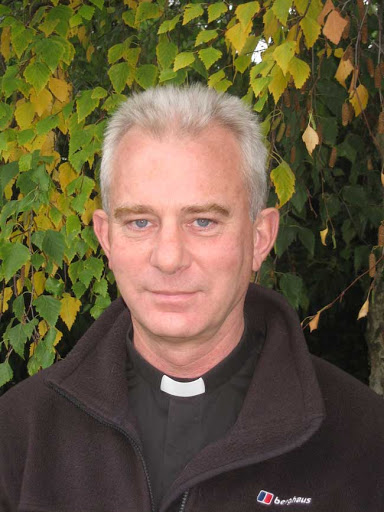